Get the Facts on Wasps Wasps and bees in Long Island are essential to our ecosystem. Not only do they help control smaller pests, but they clear away dead insects and help the spread of pollen. With that said, bites from bees and wasps are painful, and can be harmful to those with allergies. Read this article to find out more about wasps.

Wasps are small, but usually not as small as a bee. Wasps are approximately 1.5 cm in length and have a striped yellow and black appearance. Their nests can be outdoors, such as a hole in the ground or in an empty tree. But they can also be indoors, such as in a shed, underneath a roof, and inside the wall.

Wasps are oftentimes found near the trashcan because they love sweets, especially liquids. They tend to prefer fruit, nectar, and other insects. It’s common for wasps to feed insect larvae to their young. Unlike bees, wasps cannot suck nectar. But they are still attracted to sweet substances like nectar, especially at the end of the summer. This is why they can be such a nuisance during this time of year.

When to Call Pest Control

You know you have a wasp problem when you see numerous wasps around your home—this typically indicates there is a wasp nest close by. If you see the actual nest, call a pest control specialist to safely remove it.

Wasps can be aggressive if they sense that their nest is under attack. They give painful stings and, unlike bees, can sting multiple times. Stings are a serious issue for those with wasp allergies, because the venom in the sting can be fatal. Ordinarily, however, a sting can be treated with rubbing alcohol and an antihistamine cream. The venom in a wasp sting contains a pheromone that arouses aggression in other wasps, so it’s best not to swat a wasp when you are near other wasps or a wasp nest.

Home » Get the Facts on Wasps

What to Do About an Ant Infestation 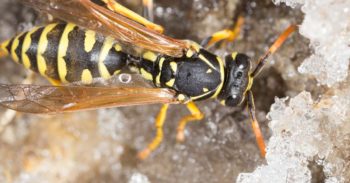