The yellow jacket wasp becomes aggressive in the fall, vying for a dwindling food supply, but what happens when winter comes? The rest of the colony dies off, and the queen burrows into the ground to survive until spring, when she can emerge and create a new yellow jacket wasp nest.

So, it’s fair to argue that the yellow jacket queen is the most important part of any colony.

How Big Is a Yellow Jacket Queen?

How is that possible? Because of the size difference between the two. Yellow jacket workers are about 1.2-1.7cm in length, while queens average 2-2.5cm long.

Queen wasps are no more aggressive than regular wasps, but their stings are more noticeable. While they have a reputation for being aggressive, yellow jackets and wasps sting defensively to protect themselves and their colony. They seem aggressive in late summer and fall when food becomes scarce… and that puts them in greater proximity with humans, which can lead to stings.

Yes, yellow jacket queens CAN sting – but it rarely happens. Queens are only seen in the spring when they’re establishing a new colony and must fend for themselves. From late spring through summer and fall, yellow jacket queens stay in the colony laying eggs and being tended to by worker wasps.

However, if a yellow jacket queen is encountered and she feels threatened – or believes she has to protect her emerging yellow jacket wasp nest – it’ll be more noticeable and likely more painful than a regular yellow jacket worker’s sting. That’s because queen yellow jackets are larger than regular ones and her increased size also applies to the size of her stinger.

Unlike honeybees, yellow jackets don’t die after stinging, so they can sting you multiple times. Only female yellow jackets sting though as the males do not have a stinger.

What Happens If You Kill a Yellow Jacket Queen?

That depends upon what time of year you kill the yellow jacket queen. If you kill her in the winter, the colony she would have created won’t emerge.

Similarly, if you kill a yellow jacket wasp queen in the spring before her workers have sufficiently matured, that can also eliminate the potential colony. If a yellow jacket nest is well established, however, then the death of the queen will have little effect.

The smartest way to get rid of wasps and other aggressive insects is to call Arrow Exterminating. We’ll start by properly identifying the type of insect, finding all of its nesting areas, and removing them. Why risk painful, dangerous stings when the experts at Arrow can do it for you? If you think you have a wasp, hornet, or yellow jacket problem, contact us today. 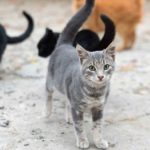 Fleas, Feral Cats, Your Pets and You: What You Should Know

Why Do We See More Spiders in Fall?