A Handy Guide to Stinging Insects 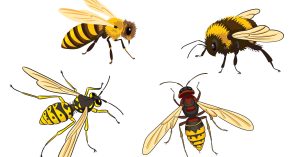 Bees, wasps, hornets – you want to know the difference to avoid getting stung. This handy guide to stinging insects can help you figure out which buzz is which.

A Guide to Bees

Bees are pollinators, making them very important to our food crops. The two most common types, detailed below, tend not to be aggressive. When you see an adorable cartoon bee, its design is based on bumblebees. Large and furry, they’re the most easily recognizable form of bee with mostly black coloring and bands of yellow, white or sometimes orange. Bumblebees only sting to protect their nest or, because they nest in the ground, they were stepped on. Bumblebees are not aggressive and rarely sting people. The United States has about 50 species of bumblebees, which are responsible for pollinating about a third of the country’s crops, according to the Xerces Society for Invertebrate Conservation. The rusty patched bumblebee is on the endangered species list. Contrary to popular belief, they do not die after stinging.

Smaller than the bumblebee but also fuzzy, honeybees are not native to the United States. Europeans brought this species of bee with them, and honeybees have since become a crucial pollinator domestically and in the wild. Rather than the bumblebee’s yellow and black, honeybees are tan and black. Honeybees rarely sting and only do so if they or their hive is threatened. This type of bee does lose its stinger when it attacks and dies afterward because when the stinger detaches, it takes part of the honeybee’s abdomen and nerves with it. Technically, honeybees are not endangered but their population has dwindled, which is disturbing because they are a major pollinator of food crops. If you see a large number of bees near a tree they’re probably swarming, which happens when a colony gets too large. A group of bees leave and will wait by a tree until scouts find a new home for them. Swarming honeybees have usually eaten first, which lowers their ability to sting. They also tend to be docile when swarming because there’s no hive to protect. Leave the swarming honeybees alone, and they probably won’t bother you.

A Guide to Wasps

While often mentioned with bees because both groups can sting, wasps and their relatives hornets and yellow jackets are a completely different species. Wasps can sting multiple times and send out pheromones alerting other wasps to join them in the attack. Wasps are always smooth, unlike bees, which are usually hairy or fuzzy. Less aggressive than the average wasp, paper wasps only sting when provoked, making them less dangerous than other types of wasps. They get their name from the small, paper-like nests they make. Their colonies are smaller than those of other wasps and tend to hang from bushes, plant stalks, porch railings, and protected spaces. While not huge pollinators, they often help gardeners by eating other pests so experts often suggest leaving them alone if the nest is in an out-of-the-way area, especially since each nest is only used once and then the colony dies in winter. The biggest danger is that they can make their nests on human buildings and then defend it. Paper wasps are smooth in shape and come in colors like orange, red-brown, burgundy, and yellow and black stripes. Despite the name, these are actually wasps. Like paper wasps, their nests look like paper, but they’re football-sized and usually anchored high in trees. Baldfaced hornets aren’t usually aggressive unless they think you’re threatening their nest because they are very territorial. If a nest is too close to your home, it’s best to let professionals handle removal. They have smooth, black bodies with white markings on their faces and abdomens. While people often mistake yellow jackets for bees because both have yellow and black markings, yellow jackets are smooth with a narrow “wasp” waist. Bees are fuzzy or hairy and usually oval without any narrowing. Yellow jackets are very territorial and since they often live in the ground, it’s easy to accidentally disturb one while walking or mowing. If they think their colony is threatened, potentially thousands of yellow jackets can swarm and attack the trespasser, making them very dangerous to humans and pets. Yellow jackets are especially dangerous in late summer and fall when their normal food sources start to dry up. Their sugar cravings will draw them to picnic areas and trashcans in search of sugary drinks and the like. Even though they’re not native to the U.S., as their name indicates, European hornets can be found in many parts of the country. With smooth, glossy, yellow-and-black bodies, European hornets look a lot like yellow jackets, but they usually nest in areas several feet off the ground, like in a tree hollow. They never nest in the ground. Unlike yellow jackets, they’re only aggressive when disturbed so if they’re in an out-of-the-way place, leave them alone. If they have nested near your home, call a professional. Never block the entrances to their nests because they will chew through wood to make another exit, potentially damaging your home. What You Need to Know About Tiger Mosquitoes Are Yellow Jackets Good for Anything?