Why Did a Man Find 15,000 Bees in His Car? | Arrow Exterminating Skip to content You may have heard the news that a man recently found 15,000 bees in his car after a quick grocery visit. In addition to being a human-interest story, it made a lot of Long Islanders wonder how common such an occurrence is, whether it could happen to them, and what can be done. Let’s look at all of that and more.

How Did a Bee Swarm End Up in a Car?

The shock of the situation is part of the reason why this minor news story went international. No one expects to find a huge bee swarm in your car after a quick grocery stop yet that is exactly what happened recently to a New Mexico man.

The unnamed Las Cruces man left his car windows down while he visited his local Albertson’s supermarket. He put his groceries in the trunk, got in the car and was just starting to drive away when he realized something was wrong and called 911.

According to Las Cruces Fire Department Chief Jason Smith the rescue service wouldn’t normally handle a situation like this. However, since the car contained approximately 15,000 bees, the car was in a high-traffic area, the honeybees were docile, and the fire company had a team member with years of beekeeping experience… they made an exception.

Jesse Johnson, a 10-year veteran of the local fire department – who has kept as many as 12 hives during his years as a beekeeper – was off duty but came in quickly when he heard the story. Johnson is passionate about protecting honeybees.

According to Johnson, the swarm contained a queen and was looking for a new location to hive. He theorized that they came from a nearby home, gutter system, or parapet.

When a bee colony becomes too large it will produce a second queen bee and part of the colony will swarm to form a new colony elsewhere. It is normal behavior in the spring (but can also happen in summer or fall) if a colony has become so large that it’s hard to support.

By swarming and establishing a new location, both colonies can survive and thrive. Beekeepers will even divide a colony when it starts to get too big to prevent swarming.

Why are Bees attracted to cars?

Johnson said that the swarm ended up in the car because it probably looking for a safe place to rest out of the sun while scouts sought out a new place to establish the colony. Fortunately, while honeybee swarming is normal and generally harmless, taking refuge in a car is unusual so it’s an experience the average Long Islander may not have.

Honeybees generally become aggressive if they personally feel threatened or are defending their hive. Because this swarm had yet to establish a home, Johnson said they were pretty docile. Though one firefighter and a store security guard were each stung, both were fine.

Johnson brought an empty hive box and, while wearing his beekeeper jacket and headgear, lured the swarm out of the car. It turned out to be one of the largest swarms Johnson has ever relocated. He used lemongrass oil on the empty hive box to encourage the bees to enter it, adding that it mimics the scent of a queen.

What Types of Bees Swarm?

Honeybees swarm when their colony becomes too large. The swarm divides off and creates a new colony with its own queen. Neither bumblebees nor carpenter bees swarm like honeybees do.

In fact, carpenter bees are considered the most solitary of bee species and live in smaller groups than any other type. People tend to refer to any group of bees as a “swarm”, but swarming is a specific act to establish a new hive.

Do Carpenter Bees Have a Queen?

No, carpenter bees organize differently than bumblebees or honeybees. Carpenter bees do not have queens or a worker class. Instead, they have male and female bees that function as generalists instead of specialists.

Why Did a Man Find 15,000 Bees in His Car? Serving Long Island and surrounding areas 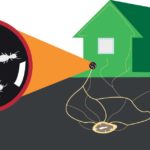