What Happens to Yellow Jackets & Wasps in Fall? | Arrow Exterminating Skip to content

Home
Stinging Insects
Wasps
What Happens to Yellow Jackets and Wasps in the Fall? First, a point of clarity for the terminology; yellow jackets are a type of wasp. They’re often a bit smaller than other types of wasps and can be far more aggressive. The following information refers to both wasps and yellow jackets, but for simplicity, we’ll mostly refer to them as “yellow jackets” since they’re the most aggressive and, therefore, most visible.

Unlike some creatures that will store food, yellow jackets have very much of a hand-to-mouth existence… meaning that the food they gather is used to feed themselves, their queen, larvae, or young. None is saved. In the spring, food is abundant, and the colony’s population is at its lowest.

However, by the time the weather starts to turn cold in the fall, the colony is at its maximum size and simultaneously food sources are starting to dwindle. This is why yellow jackets are so aggressive in the fall. Like any other starving creatures, they’re ill-tempered and desperate to get anything that can be used to feed themselves, the colony, or the queen preparing for winter survival.

Starving yellow jackets will even attack honeybee hives… devouring the bees they kill, the larvae, and their honey. Technically yellow jackets might try this other times of the year as well, but the cool temperatures of autumn make bees sluggish and less likely to fight off a yellow jacket attack.

Climate change’s effect on the seasons could leave yellow jackets around longer because it is not as cold and gives them more time to destroy vital honeybee hives. Conversely, colder winter temperatures could kill yellow jacket queens – meaning fewer new colonies in the spring. Since both honeybees and yellow jackets are vital to healthy gardens, the effect of climate change on their populations could have serious consequences.

While yellow jackets tolerate colder temperatures than bees, they will eventually die off. Only the new queen, who hides deep in the ground, will survive the winter to start the colony over again in spring.

Yellow jackets are far more tolerant of cold weather than bees, but they can’t survive a true winter. Yellow jacket workers die after 5-7 days of temperatures 45 degrees Fahrenheit or colder. The new queen, who will create next year’s colony, survives by burrowing deep into the ground where she hibernates until spring.

This myth is actually true!

When you swat or kill a yellow jacket, the dead insect gives off a pheromone which attracts more yellow jackets from its colony. This is why the National Park Service recommends avoidance when it comes to yellow jackets and making sure your home is not a nesting location.

The smartest way to get rid of wasps and other aggressive insects is to call the professionals at Arrow Exterminating. We’ll start by properly identifying the type of insect, finding all of its nesting areas, and removing them.

Why risk painful, dangerous stings when the experts at Arrow can do it for you? If you think you have problems with wasps, hornets, or yellow jackets, call Arrow Exterminating to identify and eliminate them. To get started, contact us today.

What Happens to Yellow Jackets and Wasps in the Fall? Serving Long Island and surrounding areas

Home » What Happens to Yellow Jackets and Wasps in the Fall? 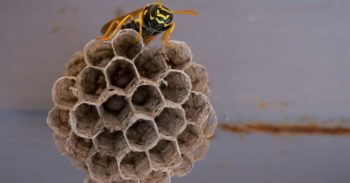